Carl D said:
Which of the two, do you recommend. View attachment 4645

I bought the Hikari a month ago am very happy with them.
J 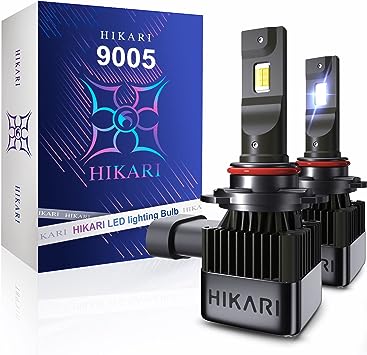 Reviews from people that have upgraded say they blow the old generation away.
S

Is there a chance we could start blinding oncoming drivers with higher lumens or not really because of the projector design?

SkyCruz said:
not really because of the projector design?
Click to expand...

^this, the cutoff on projectors are very sharp

Also those lumens are surely a lie. I think those are theoretical numbers based on the diodes themselves in a lab in short bursts before they burn themselves to a crisp, not what they actually do.

Also probably only even comparable looking at those lumen numbers within a particular brand, so the one with the higher number is their brighter one, but can't compare that to another brand.

IMO, if you are a prime member, just buy several as long as on the website it says "free returns" and just return the ones you like the least. Much easier to tell the difference side by side putting one in each headlight.

Someone also recommended Nineos to me for example, and I found the Nineos worked much better in a reflector (big foglights on a Dodge Ram) than the Hikaris, but I wouldn't have known unless I tried both side by side. These are their latest model: https://www.amazon.com/NINEO-9005-Repacement-Levitation-Conversion/dp/B08HMHGWY5/

Of course the other issue is you want to get the color as close to the DRLs as possible, and LEDs are all slightly different amounts of yellow or blue in the white light. If you're picky like me that can be a game changer too.
1 - 6 of 6 Posts
Join the discussion
Continue with Facebook
Continue with Google
or sign up with email
About this Discussion
5 Replies
5 Participants
Last post:
JASmith 6 mo ago
Hyundai Santa Cruz Forum
We’re a forum community dedicated to Hyundai Santa Cruz pickup truck owners & enthusiasts. Come join the discussion about upgrades, towing capacity, reliability, and more!
Full Forum Listing
Explore Our Forums
Hyundai Santa Cruz General Discussion Accessories and Modifications Dealers, Purchasing and Ordering Problems and Solutions Hyundai Santa Cruz Photos and Videos
Recommended Communities